Sale on canvas prints! Use code ABCXYZ at checkout for a special discount!

Honoring the Spirit of Halloween

Previous Next View All 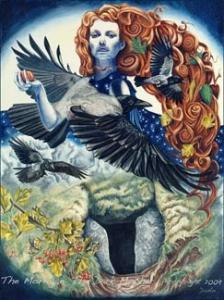 Today is Halloween. For most, today is the day to dress up in crazy costumes, go to parties, lead children to stranger's houses to collect candy, and, for many adults, to act like children. America is really good at degrading tradition to its most base of qualities. I have long thought it strange that Americans have adopted an old pagan holiday, but then, the holiday hasn't really been adopted, as much as usurped and corrupted.

Celebrating Halloween doesn't have to be just frivolous and empty fun. It also doesn't even have to be observed in conflict with non-pagan religious belief. At the heart of Halloween is a celebration of the closing of the year and an honoring of the spirits of our ancestors.

We see the cycle of death around us, as the landscape transforms and goes into its dormant stage. It makes sense that the Celts would see this as the end of the year, for endings are occurring all around us at this time. This becomes a wonderful time to reflect on all that came in the previous months and let go of the negative influences and burdens of the previous cycle, while celebrating the achievements and preparing for the new. It is not certain where the idea of costumes came in, there are lots of speculation, but nothing conclusive. I like to think of dressing up as a way of re-creating your new self for the coming year. It is an opportunity to try on a new identity, see how it fits, before starting the new cycle. We are not limited to mundane, well-defined roles. We can become archetypes, heroes, spirits, fantasy creatures whose attributes of which we can connect to and carry through into the next year.

There is a dark aspect to Halloween. Many dress as monsters, attend haunted houses, talk of the ghosts and ghouls that run rampant through the neighborhood. Much of this stems from a very deep-rooted fear and misunderstanding of death and endings in general. But, if we look at this dark aspect as something positive, rather than frightening, what might we discover?

The painting posted here is of The Morrigan, the ancient goddess of death and fertility and the land, now most commonly associated with ancient Irish myth. The Morrigan is a symbol representing the dark aspects that we all experience and possess within. Everything emerges from the dark, the child from the womb, the day from night, light from the void, and The Morrigan symbolizes the power that exists within this place of potentiality. She is the perfect symbol for Halloween as we celebrate the end of the cycle by returning to the dark and beginning the cycle again. We acknowledge that day gives way to night, that the trees and plants die around us, only to return again with the light of spring.

The dark aspect is not something to be feared, for to fear the dark, is to be afraid of our own nature and the action of creation itself. Darkness is to be understood as part of a natural cycle of rise and fall, expanding and contracting, reaching out and turning inward. The symbol of The Morrigan offers us a way to understand and navigate the dark paths throughout our life, if only we overcome our fears and reach out to accept the “fruit” (or perhaps candy!) of knowledge she offers us. I am not suggesting that we all worship and idolize the image of The Morrigan, instead, I am encouraging that you look upon her as a symbol and archetype, representing the energies and qualities that your particular belief system supports. You can find your own symbol that represents the qualities of The Morrigan and use that to help you connect to the energies of the season.

Ultimately, Halloween can be a day of transformation and an evening of celebration, it doesn't have to be empty and meaningless. We can use this time to honor what has passed before us, let go of that which burdens us, and remember our ancestors who sacrificed their lives to give us what we have today.

Have a safe and transformative Halloween!